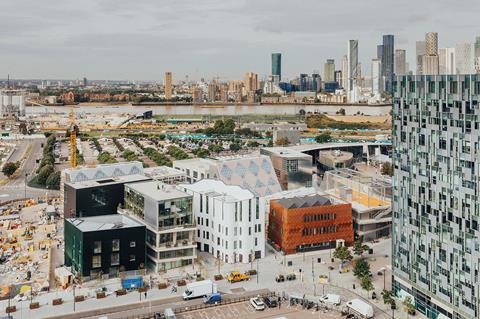 The Greenwich Design District was designed by eight different small architectural practices to ensure each building had a unique identity. Narrow passageways and courtyards give the area an intimate feel. It offers studio space at low rates and is now mostly let

Unlike the high-rise housing blocks surrounding the design district, this consists of buildings no more than four storeys high packed closely together to give the district an intimate feel. The blocks are mostly muted in appearance, being finished in materials including brick, concrete, aluminium and stainless steel. Two buildings stand out in this largely monochrome landscape, one clad in an orangey-brown Corten weathering steel and the other a vivid green which shifts to a bluer shade depending on how the light is falling. These two buildings also happen to be the only ones constructed from timber.

Designed by Mole Architects, the timber buildings were carefully modelled and designed to minimise embodied carbon and ensure that they would not overheat, a potential problem with lightweight construction and increasing summer temperatures. Now fully occupied, the realities of the different demands of a diverse community mean one of the buildings has been radically altered due to the specific requirements of the tenants. How flexible are these buildings and how are they performing 10 months after the design district formally opened?

According to Meredith Bowles, principal of Mole Architects, the brief was straightforward. “The brief here was inexpensive space to let to creative industries,” he says. The brief included a floor-to-wall ratio that could not be exceeded – this was to keep down costs, which were set at a maximum of £3,000/m².

Bowles adds that there was an assumption that each floor would feature one big space. “We thought about Victorian warehouse spaces, which are perfect as they can take being banged around, have big windows with plenty of light and heavy structures which keeps them cool.” 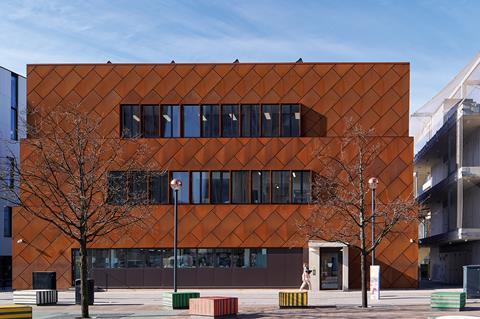 The building design was inspired by the former gasworks on the site. The Ziggurat steps in at each level like a gasholder and is finished in weathering steel which references the rusted frame

Research turned up a Second World War era photograph of two scientists who were working at the fuel research station on the site which was trying to find alternative fuels for navy ships. One scientist wore a black lab coat, the other a white one, and they were holding two very different, and strange devices which provided a narrative for the two very different looking buildings.

The Corten-clad building, which is known as the Ziggurat or C2 to give it the formal name, was inspired by the now dismantled gasholders on the site. The rusted surface of the Corten references the corroded frame of the former gasholder, and the building steps in towards the top like the telescopic holders that rise and fall depending on how much gas is being stored. 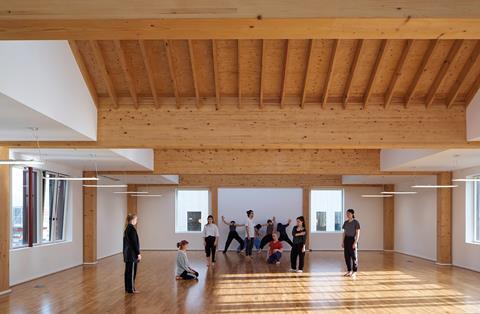 The Ziggurat has a sawtooth roof with vertical rooflights to flood the space with light, and blinds on the south side for hot days

This was a time when fears about the flammability of timber had not taken root as the buildings were designed before the combustible cladding ban. Building in timber was more expensive than concrete or steel, but this was offset by savings on the foundations as these could be less substantial.

The Ziggurat has a glulam frame to enable the large spans on each of the building’s three floor levels. Cross-laminated timber (CLT) is used for the floor slabs and structural insulated panels (SIPs) for the exterior walls. 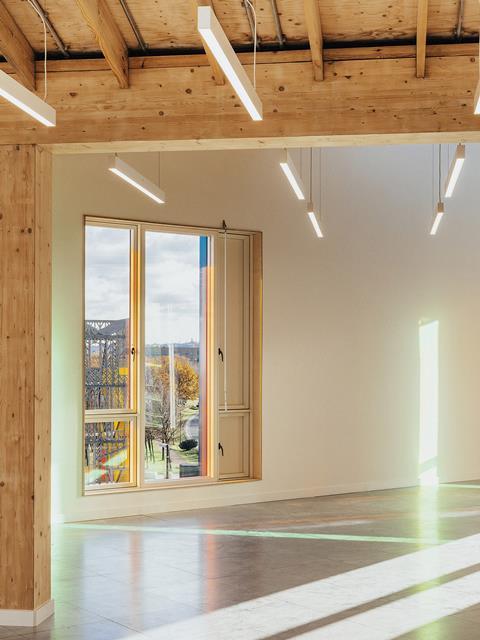 Bowles explains that, as the building steps progressively inwards at each level, the beams need to cantilever out on the lower levels as the columns are set back from the edge. SIP panels are lighter than CLT, reducing the loads on the cantilevers with the added benefit that these are installed in one operation rather than needing to install the insulation separately had CLT been used. The Rhomboid features vertical external walls, so features a CLT structure with glulam columns and beams at the centre of the building to support the large spans.

Ensuring that the building remained low carbon in operation during its life was important to Bowles, and to give it that cool, airy Victorian warehouse feel. Skelly and Couch modelled the building using CIBSE’s TM52 methodology and established that the building would become uncomfortably hot on very hot days when the building was fully occupied.

As the building would meet building regulations and BREEAM credit requirements without these measures, the client had to be persuaded that the additional investment was worthwhile. The overheating scenarios were presented to the client. “Fortunately, the contractor was in the room and told the story of a complex retrofit of an air-conditioning system,” says Bowles. “We said, ‘you’re going to get complaints because it will be uncomfortable’. Fortunately, they went for it.”

It is being leased by a dance company called Clod Ensemble as a rehearsal space and, on the day that Building visited, the sun was shining and the space was flooded with light. The windows were open, and the space was pleasantly cool although it was 20ºC outside.

Roxanne Peak-Payne, Clod’s executive producer, says a range of people have used the space in multiple ways in different weather conditions and all are delighted with it. “The feedback from everybody who has come into the space – there is a kind of ‘wow’ moment every time someone steps in; it has a very big impression,” she says.

Peak-Payne says the top-floor space is pleasantly cool, even recently when temperatures exceeded 30ºC. “It has been very hot but the skylights open, and also when you open the long windows fully there is a natural draught created and it becomes cool very quickly, which is great.”

Downstairs, on the first floor, the cross-ventilation strategy has been compromised by the changes made to the building to suit Clod Ensemble. It is using this space for offices and a recording studio plus another tenant has taken a small space on one side of the floor.

This meant that the space has been subdivided with partition walls and the difference in temperature is noticeable although not unpleasant. This could be due to the blinds being left up despite the sun shining in.

Peak-Payne says the main office, which has windows on two walls, is fine but that a smaller room, which has windows on one side only, does get warmer but is still usable. She adds that the blinds have been used to reduce the sun’s intensity in the late afternoon and also in the upstairs rehearsal space in anticipation of hot weather. 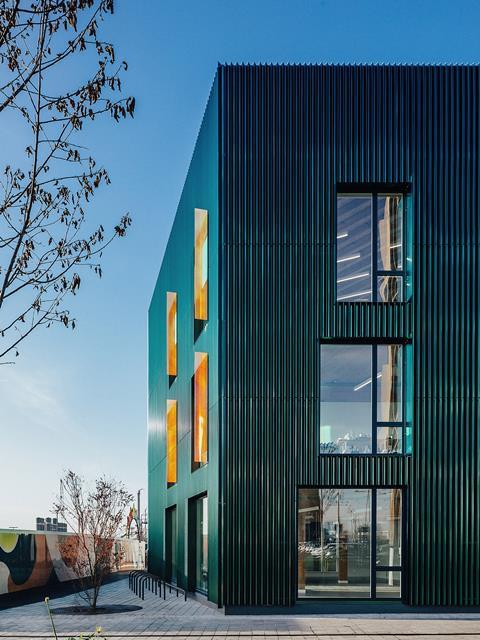 The rows of windows on the south-facing elevation are arranged in groups of three with a blind for each group. Each blind is operated by a manual winder. Unfortunately, the location of one of the partition walls has separated the winder from the blind it is operating, with the winder in one room and the windows next door. Less than ideal.

Wouldn’t a building management system (BMS) automatically controlling the blinds solve these issues? Bowles says not: “A BMS has to be programmed and managed. There is the issue of user control and cost.”

Another issue is noise transmission. A dance troupe were practising on the top floor during Building’s visit. The volume was cranked up on the sound system and very noticeable in the offices below.

The space between the Ziggurat and B2, a building designed by 6a with a steeply angled facade, is occupied by a giant transparent caterpillar-shaped construction. Designed by SelgasCano, which was responsible for the 2015 Serpentine pavilion, it houses food stalls.

This food had to be cooked somewhere, with the ground floor of the adjacent Ziggurat an obvious choice. This presented Bowles with a challenge as a space designed as an artist’s studio had to be made to work as a commercial kitchen.

“There were two issues. Firstly, would the space be high enough to fit in the ventilation system? And we were concerned about the impact of condensation and potentially fire on the exposed timber,” he says.

The ventilation system is bespoke and is effectively a giant cooker hood that extends along the length of the cooking areas. The glulam beams are 450mm deep and the ventilation system extends approximately 800mm below that. The floor has been raised to accommodate additional drainage. Despite losing some 1,500mm of headroom, there was still just enough room, a benefit of emulating high-ceilinged Victorian warehouses.

It has been very hot but the skylights open, and also when you open the long window fully there is a natural draught and it becomes cool

The ventilation system features powerful extraction fans which suck out the moisture generated by boiling liquids in saucepans. It is also fitted with a fire suppression system to tackle any pan fires. A fire-retardant coating has been applied to the exposed timber, too. “We were satisfied we weren’t doing anything foolish,” Bowles says.

One room on the first floor of Ziggurat is being set up as a recording studio by Clod Ensemble. The vibration generated by the ventilation system was transmitting through the slab into the studio. The problem was solved by swapping the ventilation system hangers for ones capable of damping out the vibrations. “If we had known that at the outset, it would have been easier to sort out,” observes Bowles. The studio is due to be fitted out by a professional sound studio specialist to take care of other noise. 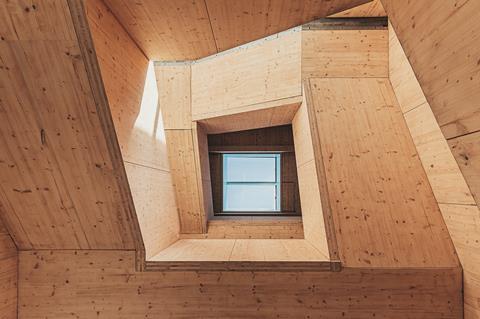 两座建筑都是用木材建造的;the Ziggurat features a glulam frame, CLT floor slabs and SIP wall panels, while the Rhomboid (pictured) is mostly CLT with walls, floors and stairs constructed from the material

It is being used by the Photography Foundation, which creates pathways for disadvantaged young adults into photography careers. Its sister company, Storytellers London, a photography agency, is on the floor below and there is a colour forecasting agency on this floor, too. The building also houses a company making bikepacking bags and another making bespoke trainers from recycled shoes.

The design district is over 90% full, with most of the available space in building D4 for a single let tenant who wants 10,000ft2 space over four floors.

The compromises engendered by some significant, unanticipated changes to the Ziggurat are centred on ventilation and to some extent user education issues rather than those imposed by the building structure. Which demonstrates that the embodied carbon benefits of timber construction do not come at the price of decreased flexibility.