Why is it so difficult to build a high street?

We can create thriving new high streets, but it requires curation and a different financial model, writes David Rudlin.

Every masterplan for a new settlement will include a high street. The lovingly rendered illustrations will show mothers with push chairs strolling past local shops, artisan bakers, cafes and maybe even a pub. And yet these streets are almost never built.

Over the last few months we have been editingTales of the High Streeta project that seeks to tell the story of a hundred high streets. In my next few columns I will be sharing some of these stories, and I thought a good place to start was the new settlement of Cambourne.

Cambourne is largely complete with 6,600 homes and 10,000 people. Yet the high street is lined with carefully mown grass where the shops should be. There is one commercial block with a few shops, a café and even a pub, however the real shopping is done at an enormous Morrisons just to the north of the high street that never was.

The shops, so it is supposed, will not be viable until the settlement is largely complete

So Cambourne’s population of 10,000 supports just 25 shops. Compare this to two of our other ‘tales’; Ludlow, with a similar population, has 253 shops (including 20 pubs) or Totnes with a smaller population and 276 shops. This despite the fact that the average household income in Cambourne is twice the figure in Ludlow and Totnes. Cambourne’s households generate half a billion pounds of spending power a year but not enough to build a high street.

There are three reasons for this.

The second is the commercial model for new development. In Ludlow and Totnes the shops were built over many years, the capital costs have long been paid-off and property costs are low.

By contrast a new high street must cover the costs of the land and construction and still produce a return in 10 years. Independent shops will be unable to fund the fit-out of shell units or provide the covenants required by investors. Lettings will therefore be confined to a small pool of the usual suspects; one of the coffee chains, a metro supermarket, possibly a chemist or bookmaker.

There is a place that has overcome these problems

There is a place that has overcome these problems. The new settlement of Nansleden in Newquay developed by the Dutchy of Cornwall may have only completed a few hundred homes, but it already has a high street with 3 cafes, a florist, wedding shop, bakery, farm shop, deli, yoga studio, wine shop and even a pet shop. How has this been done?

The trick has been to treat the shops as a non-commercial element like the roads and the schools. Build the shops in advance of demand, fit them out with a shop front and services so they are ready to use and let them below market rent on short leases to hand-picked independent businesses.

The problem lies not with the designer but the financial model

This is not what happened in Cambourne. There have been attempts to attract a developer to build the town centre, the most successful of which resulted in a solitary row of shops and was only viable because it was cross subsidised by the big box units. These of course undermined the prospect of the rest of the high street ever being built.

As with many of the issues I have discussed in this column, the problem lies not with the designer but the financial model. Until this changes, those lovingly rendered high street illustrations will remain a fantasy and we will continue building car dependent new settlements. 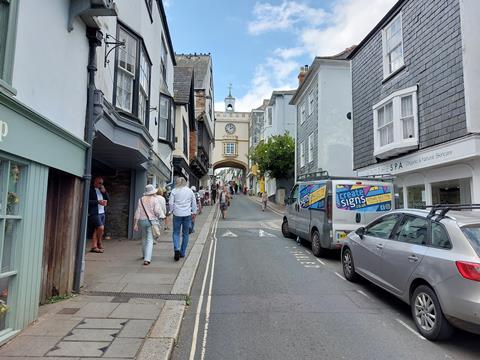 David Rudlin is principal and a director of URBED (Urbanism Environment and Design), a former chair of the Academy of Urbanism and an honorary professor at Manchester University