This understated retrofit of a former Tanqueray Gordon gin distillery, balances commercial imperatives with a playful sense of joy in materials and generosity to context, Ben Flatman writes 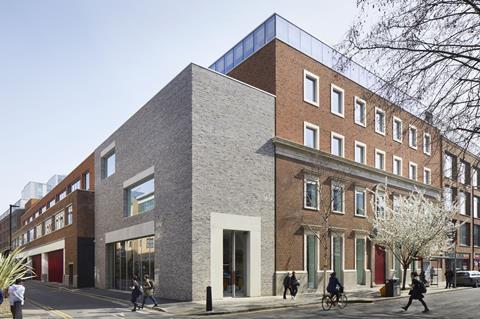 从高斯韦尔路和梨树街的拐角处观察到的技术。The new “art box” on the corner stands on the site of a former pub, and contains the reception on ground floor and a gallery/boardroom space on the first floor.

Although the key drivers were fundamentally commercial, BGY has not approached this project as some run-of-the-mill retrofit. Instead, there is a playful mix of revealed history and urban intervention, plus a beautifully understated rooftop timber extension.

One of the options at feasibility stage was a demolition and new-build approach. “But my first impressions on visiting the site were that we had something that was hugely characterful” says Assaad, “and there was beauty in the distinct conditions we found within the varied contexts of the building.”

From a sustainability perspective, BGY also quickly realised that they could save a huge amount of carbon by working with the existing fabric.

This is not BGY’s first scheme for General Projects. They have collaborated before on the controversial refurbishment of Stirling’s No 1 Poultry and have teamed up again on the reinvention of the Heals building on Tottenham Court Road. This track record of working together has enabled a partnership that nicely marries commercial imperatives with a strong commitment to design, adaptive re-use and sustainability.

There is a Chippefield-esque quality to this project that belies its humble commercial origins. The complexity of the site and its two very different street elevations have been given a new coherence.

As an urban composition, the development consists of three main elements – the Goswell Road and Pear Street elevations and a long vacant corner plot, previously occupied by a pub.

A handsome neoclassical facade faces onto Goswell Road and provides a formal presence to the primary street frontage. This was originally the front door to the Tanqueray Gordon site. 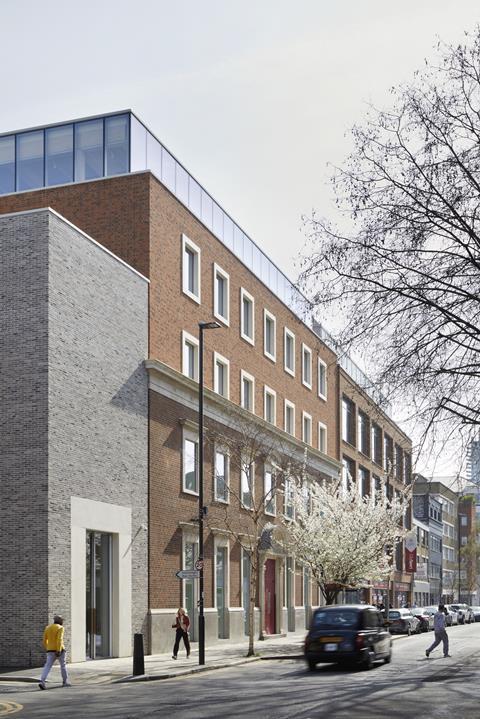 The retained neoclassical facade of the former Tanqueray Gordon and Co Ltd distillery has been extended vertically with a new two storey brick elevation and stepped back glazed treatment to the fourth floor. At ground level the sills have been lowered to allow daylight into the basement.

Here, an existing second-floor brick attic storey has been removed, but replaced by an almost identical brick treatment, which now extends upwards by one additional floor. It could have looked clumsy and overbearing, but the adherence to an essentially classical ordering of the fenestration and detailing enhances the original understated neo-classical elevation.

The fourth floor is a glazed pavilion but is stepped back from the main elevation and has an appropriately recessive presence when seen from the street.

On the ground level, BGY have lowered the window sills to pavement level. Using stone removed from beneath the original sills, the new granite window returns match exactly the existing stone base. The effect is surprisingly undisruptive to the overall composition and has the functional benefit of allowing daylight into the basement along this elevation.

The changes are substantial but are carried out so deftly and with such empathy for the existing building and streetscape that the whole effect is beneficial rather destructive. It also makes a nice change from so many contemporary additions to older buildings that feel the need to shout loudly about their difference.

Along Pear Tree Street, the 1950s distillery presents itself as a conventional mid-20th-century brick industrial elevation. This was where the project hit multiple planning objections, mainly due to daylight and overlooking concerns raised by the residents of the flats on the opposite side of the road.

At ground level, three existing loading bays have been retained, complete with concertina industrial doors. The loading bay area had been designed so that it could be subdivided into smaller units with high visibility street frontages but has now been let to a single tenant and will remain as a single space.

Tying these two existing elevations together is a new grey brick corner pavilion. The pub that long occupied this site was once owned by Tanqueray Gordon & Co Ltd. The pub appears to have survived the Second World War bombing that destroyed the distillery but was later also demolished. The corner plot was then left empty for many years and used for car parking. 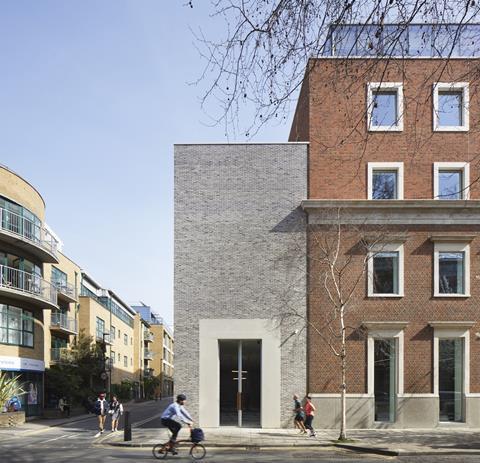 The new entrance to the building is through the new corner extension - the “art box” - which sits on the site of a former pub.

The Goswell Street elevation of the new corner pavilion is entirely blank, apart from a tall centrally placed door at ground level, identifying this as the new primary entrance for the development. Along Pear Tree Street, three large windows allow pedestrians walking south on Goswell Road a glimpse of the activities taking place within. This new-build element acts an urban fascinator and signals arrival and entry.

The entrance foyer is a collaboration with Formafantasma, an Italian design partnership fronted by Andrea Trimarchi and Simone Farresin. Essentially a permanent recreation of an installation they had previously presented at the Milan furniture fair, it channels 1970s Milanese modernism and the ochre tones of Mount Etna’s volcanic ash into the world of the humble office reception area. 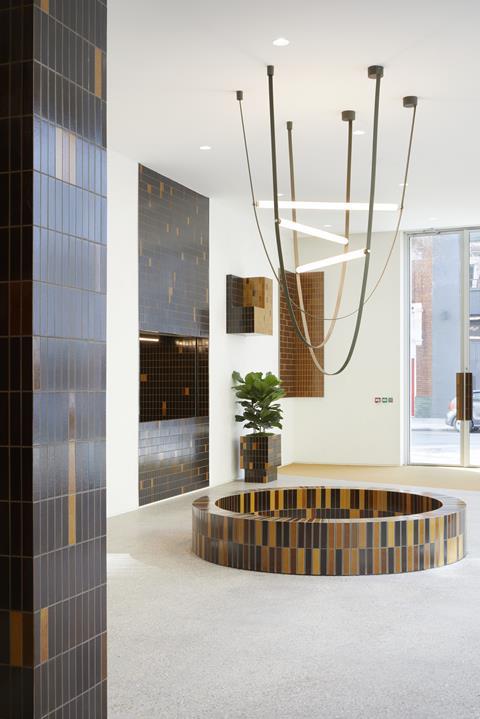 The interior of the new reception has been designed by Formafantasma. It is inspired by 1970s residential foyers in Milan.

It sounds more exciting than it actually is, but at least avoids the generic feel of so many of these types of spaces. However, with an underwhelming reception desk that disappears into the wall and not much seating, it is not hard to imagine a new tenant wanting to radically reimagine this space before long.

Upstairs within the “art box” a generous double-height room presents opportunities for use as a gallery space or boardroom. Direct access to the ground-floor reception might have helped to give this space a stronger identity within the whole scheme. 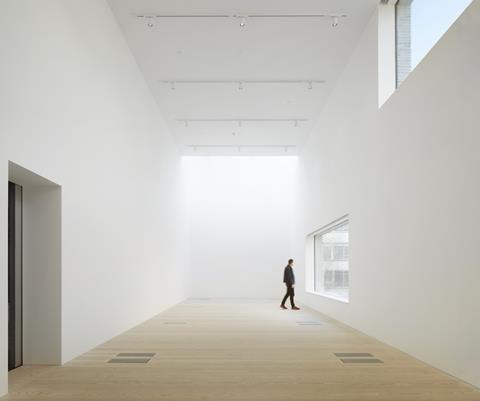 It is a tried and tested approach but is dealt with here with a rigorous authenticity. The simple concrete structure is left largely unadulterated by services and clutter.

The existing structure on the first four floors of the building has been stripped back to the bare concrete. Almost all the mechanical and electrical services are placed under a raised floor.

Assaad tells me that he approached this project as an “opportunity to add another layer that unified and simplified the building through a sense of collage.” It is a credit to the project team that they have largely achieved their objective. “We wanted a sense of joy, not a homogenous office space,” says Assaad.

This becomes doubly clear on the new third and fourth floors, where the distillery’s structural grid is picked up again, but this time in cross-laminated timber. The effect is to create a common language across all of the main office floors, but with a nicely handled variation in materials and colour as you rise up through the building.

Two additional floors of office space have been added on the third and fourth floors. The timber structural grid sits directly above the concrete columns of the floors below.

At basement level BGY has removed the floor slab at the rear of the site to bring in daylight and maximise the floor space. In total, with the additional two top floors, the project has added 50% to the lettable floorspace.

It is rare that a commercial office building sets an example in terms of how to repair a damaged streetscape or preserve a modest but valuable existing building. But, with the support of an enlightened client, this is what BGY have achieved.

Adaptive re-use and sustainability are high up on the profession’s agenda, and Buckley Gray Yeoman have demonstrated here that this kind of approach can be both commercially savvy and architecturally exciting.

This is carefully considered and unshowy architecture that delivers for its client – but also enhances and enriches its context. 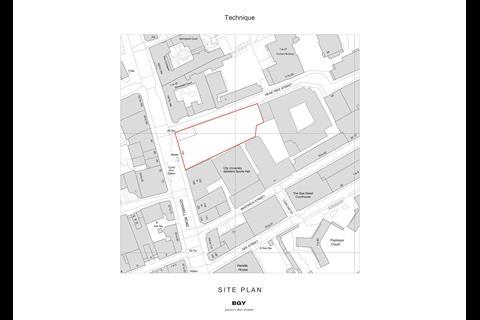 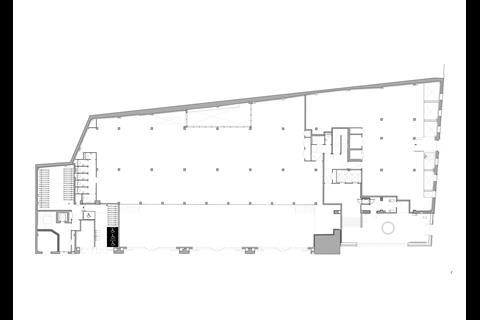 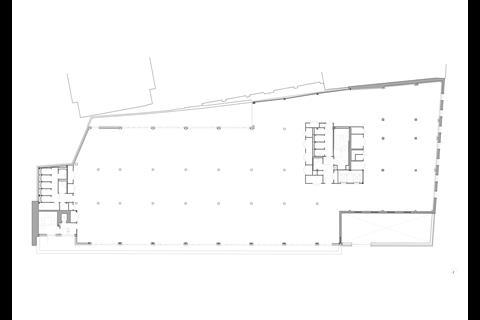 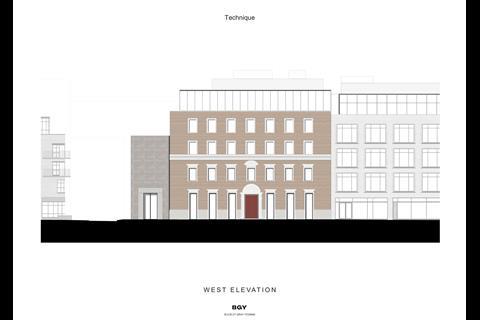 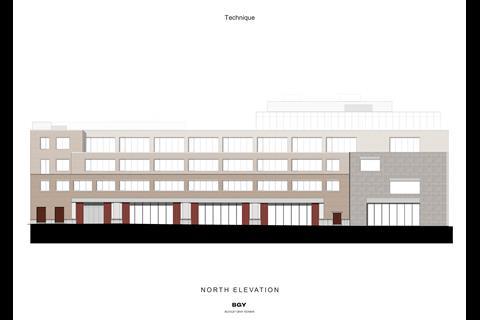 History of the site

After many close calls, when bombs fell nearby, the offices, warehouse and distillery were finally destroyed during a bombing raid on the night of 10th to 11th May 1941. The 132 Goswell Road site was completely rebuilt between 1951 to 1957. By the 1970s the site had become a warehouse before being converted to office space in 1989. 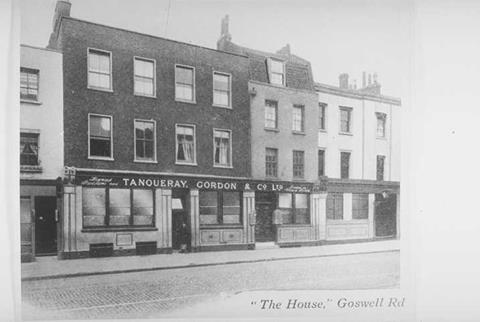